Dutch Masters – At DeVroomen, Family and Customers Are One and the Same

This article appears in The Illinois Landscape Contractor Magazine, September edition. You can read the original article here.

Jacobus Theodorus de Vroomen. The name sounds like it belongs to one of the old 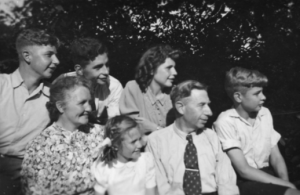 masters of Dutch painting, but Jacobus (1895-1958) was a different kind of artist. He “painted” with plants and flower bulbs since launching DeVroomen Garden Products in 1925. He started with very little, but built the business into an incredibly successful company a few years shy of its 100th anniversary.

“The DeVroomen family has created many long-term partnerships over the years,” said Roland VanDenBergh who joined the company in 1988 and serves as Chief Operating Officer. The customer relations experience goes far beyond placing an order. “I’ve watched customers grow, change ownerships from parent to the next generation, and we have helped each other through tough times .”

DeVroomen Garden Products is well known as a premiere wholesale supplier of spring- and summer-flowering bulbs along with bare root and plug perennials. Landscape architect Craig Bergmann of Craig Bergmann Landscape Design in Lake Forest has been a customer for nearly 30 years. “DeVroomen’s way of selling plants is to sell tried, true and top quality. They were plants people, not just sales people. I think they are a great example of supplying quality goods, but they also have the people side of it. They get it. If they’re short on something they do their darnedest to help get a reason-able substitute — they go the extra mile.”

In the 1950’s, Jacobus’s sons Hugo, Ben and Dick took over the business. Since that time, the company has gone from offering bulbs to selling about 60 percent perennials and 40 percent bulbs. “About 40 percent of our product is for growers, 40 percent is for landscapers and 20 percent is for independent garden centers,” VanDenBergh said.

Most of the sales team has been with the company for a very long time — Jack DeVroomen (42 years) and Eric Olson (39 years). Richard Walsh, Ben VandeGulik, Tom Hudak — just to name a few — have all represented DeVroomen at least 20 years. “We have seen the same longevity and dedication with our customer service team, led by Angela Schultz, our director of operations,” VanDenBergh says.

“DeVroomen opened the door to so much opportunity in my career, and their friendships have lasted until this day,” said Jill Selinger, manager of education at the Chicago Botanic Garden. “I have such fond memories of driving the car for Dick as we delivered flower bulbs all over the Chicagoland area. I look back on my days working with them so fondly, and learned so much about bulbs, the green industry, and myself during those years.”

Roy Diblik of Northwind Perennial Farm in Burlington, Wisconsin, has known the company since 1982. “Jack and his dad came to The Natural Garden where I worked. We bought bare-root plants from them. There was a tremendous consistency with the products and the visits were nice — so social and friendly. I always knew I’d learn something from them. I’d only known perennials for four years and when they are bare-root plants, you don’t have a reference point for potting. They helped me understand how they grow in containers and how to get them to live. Jack had a great personality — comfortable and friendly, and then I met Roland — he was the same way — that’s just their nature.”

Diblik still buys bareroot plants and all of his bulbs come from DeVroomen. “I mix them with plant communities, especially small-flowered species tulips. You can count on them to have what you need, when you need it.”

Before joining Midwest Groundcovers, Christine Darbo worked at The Natural Garden. “I knew Dick and his son and still get emails from Dick’s wife, Puck. I designed a plaque and placed it in the woods where the DeVroomen bulbs grew. It was a woodsy quiet spot. I love the quotation at the bottom: ‘Together still so many plans, together so much courage. We often said together, how well we’re off.’ It’s a translation of the Dutch, of course.” She brought it to Midwest Groundcovers where it is displayed in the patio garden.

Peter Orum, founder of Midwest Groundcovers has dealt with DeVroomen for decades. “They were not the first company we bought from — we had a perennial supplier at the time, but they are very persistent without pestering you. I talked to them at trade shows.” DeVroomen has supplied him with perennials and bulbs for about 40 years. “Jack, over the years, helped us with trips to Holland and what to see there. It’s a very special relationship we have. You know the product is good and they take care of you.” 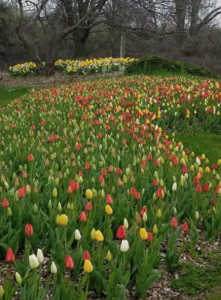 “I was one of the first Americans in the Chicago region to meet Jack,” Bergmann said. “He showed me pictures of his wife, his kids, his farm. They were nice people and the Dutch are so ingrained in horticulture. It was just so fun to meet such a professional with bulbs and perennials. They were very keen on selling bare root perennials and we’ve bought every year since. When Jack’s father died, I went to Holland for his funeral. Jack was nice enough to come to my father’s funeral. I’d never been to Holland and went for four days. I took a train and a bus to get to where they live — very rural. His mom was still alive — all sweet as get out. They really treated me like family.”

In the past two decades, VanDenBergh has witnessed many changes. “We’re constantly trying to figure out how to maintain the quality of the product. Everything comes by ships and they are well-ventilated and/or frozen.”

Perennial sales declined a bit for a few years. “But with Covid hitting and with families getting back into gardening, we’re seeing a definite uptick. Our industry is doing very well.” Transportation costs have soared. “We are always working with our partners to keep our prices competitive, so we work hard to find out what the consumers want to pay, and work backwards from there. We’ve all become smarter business people over the years.” 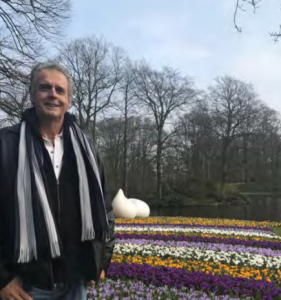 “We’re focused on the varieties that have been around and proven. There might be 40 to 50 new bulb varieties every year, but landscapers are looking for tried-and-true varieties that are sure to make a splash come spring,” VanDenBergh said.

DeVroomen offers an outstanding selection of 900 different bulbs. “We can always purchase varieties outside of the core program. We have three temperature controlled warehouses with over 150,000 square feet. This enables us to bring in one of the largest bulbs and perennial stocks in the U.S. and to hold orders for customers that need later deliveries.”

In 2014, the company took over the Simple Pleasures retail brand. They also brought to market many other products like citrus plants and succulents for independent garden centers.

When VanDenBergh looks to the future, he expects more mergers. “I think companies will be working together more because of logistical issues throughout the world. We’re going to be spreading out and helping each other a lot more.” Labor has become the number one issue for the green industry, including growers. “It’s a tough thing, and you have to find innovative ways to get things done. This is global, not just in the U.S.” DeVroomen has many customers — large and small in North America. “We supply the White house, most botanical gardens, large cities like Chicago, Atlanta, and Denver, as well as airports like O’Hare, and millions of personal gardens.”

One of his fondest memories is the relationship with Mayor Richard and Maggie Daley. “When she became sick with cancer, we were in the test field in Holland that had unnamed bulbs. We purchased a pink, lily-flowering tulip and we named it for her. When she christened it, she told the crowd that the first fight she and Richard had before their wedding was because she wanted to carry tulips into the church — and she did. When she spoke, Major Daley shed a tear which will be remembered by many who were present. They did a lot for Chicago and the horticultural industry as a whole. It was one of the most special events I’ve been involved in and she will be remembered for a very long time.”

The company’s customer relationships are long lasting for many reasons. “We stand behind what we sell and there’s the simplicity of doing business with us. We have one of the largest warehouses of bulbs.” VanDenBergh prides the company on its attention to special packaging. “We package everything for a job to help
prevent any errors on job sites.” Quality, longevity, standing behind the product and being 99.9 percent on time is what has kept the company thriving. VanDenBergh notes that this year, like last, will be a challenge because of Covid.

“The Dutch are innovators when it comes to the environment,” VanDenBergh said. “We try to grow clean and stay away from chemicals. Quality is a huge issue, but at the same time we’re asking ‘what are we doing for the environment?’” He spent three weeks in Holland where all the talk was about how to make the world a better place. “We’ve been looking at our plastics, our paper and everything we touch and we ask if there’s a better way to do things. We see more solar panels and wind energy used. One of our main packers in Holland decided to do their entire warehouse with about 250,000 square feet of solar panels, and now they don’t have to use any other energy to run this massive operation.” 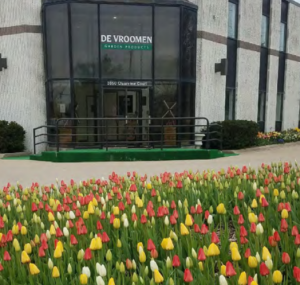 Sustainability is not just a buzzword for DeVroomen. Their core value is ‘Increasing the Quality of Life while always keeping the environment as our top priority.’ “DeVroomen would not be where we are today without our customers and vendors as well as all of the partnerships and the dedication of our employees,” VanDenBergh said. Like an old, fine Dutch painting, we expect DeVroomen and its partners will be treasured and admired well into the future.

See for yourself at www.devroomen.com